SQLite locks the database whenever a write transaction begins. Until that transaction commits or is rolled back, no other connection can write to the database (in older versions of SQLite, it used to be the case that readers were blocked, too, but thanks to the addition of write-ahead logging, readers can co-exist with the writer and vice-versa). Because SQLite does not allow two connections to write to the database simultaneously, SQLite is unsuitable for the entire class of applications that may require concurrent write access.

What I'd like to show in this post is that, although SQLite does not support multiple connections writing simultaneously, writes happen so quickly that it may be sufficient to merely provide the appearance of allowing concurrent writes.

For Python programmers, this situation is complicated by the convoluted transaction management of the standard library SQLite driver, pysqlite. By default, pysqlite opens a transaction when you issue your first write query (it does this by parsing every query you execute), and then committing that transaction when you issue any other query that is not a SELECT, INSERT, UPDATE or DELETE, e.g. CREATE TABLE or PRAGMA. This makes it very easy to issue a write, which acquires the write lock, and then keep that lock while you issue SELECT queries, etc, that have no need of the write lock, tying up the database for an unnecessarily long time.

Even if you manage to keep your write transactions very short, or even if you are running in autocommit mode, heavy contention for the write lock will inevitably lead to these:

To see this for yourself, try the following: 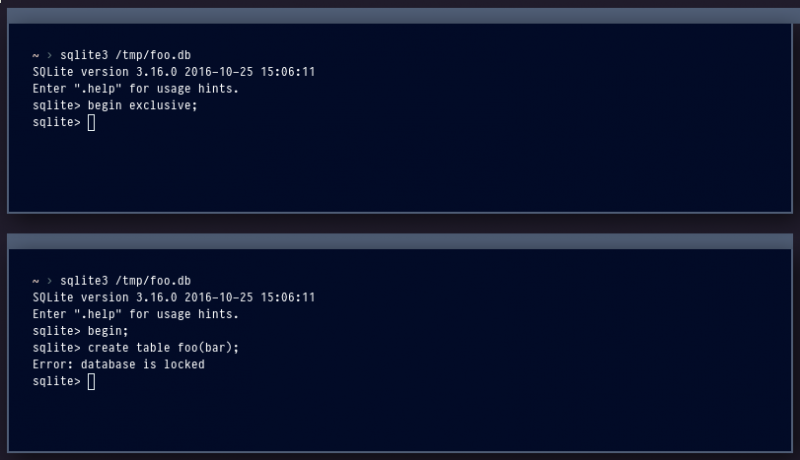 I've had success using a very simple approach: I eliminate the possibility of lock contention by dedicat ing one thread to the task of issuing all writes for the application.

Last Fall, I added a new extension module to Peewee ORM called the SqliteQueueDatabase (documentation link) that serializes all writes by pushing them to a dedicated writer thread. Best of all, the SqliteQueueDatabase uses the same APIs as all other Peewee databases and works as a drop-in replacement for the regular SqliteDatabase!

Ordinarily, all queries get executed via the Database.execute_sql() method, and after execution will return a Cursor instance. Depending on the type of query executed, the Cursor can be used to retrieve result rows, fetch the number of rows modified, or get the last insert ID. Ordinarily this all happens synchronously.

With the addition of a separate thread handling writes, the query's actual execution becomes decoupled from the method-call that invokes it. It becomes asynchronous, in other words. To preserve the semantics of the original method call, I needed to:

By doing the above, it appears to the caller as if the query were being executed synchronously.

The object responsible for retrieving results from a query is called a Cursor. Peewee is designed to work with drivers that implement the DB-API 2.0 spec, so under normal circumstances executing an INSERT query looks like this:

When using SqliteQueueDatabase, however, a separate thread is continually attempting to pull queries from it's work queue. When the worker gets a query to execute, it follows the usual pattern of obtaining a cursor from the connection and calling Cursor.execute(). Then, the worker notifies the caller that the query has been executed and results (if applicable) are ready.

To implement this, I created a simple class that exposes the same general interface as the usual DB-API 2.0 Cursor object. Here's a somewhat simplified version:

In the above code, AsyncCursor is really just a lazy result set, that only blocks when the caller requests information that could only be found by executing the query.

The last piece is the integration with the Database.execute_sql() method, which is the API through which all queries are executed in Peewee. The only modification necessary is to check whether the query is a write query or not, and if so, place the query on the queue rather than executing it directly. The code looks something like this:

The entire source listing can be found here, if you're curious: https://github.com/coleifer/peewee/blob/master/playhouse/sqliteq.py

I've found the approach outlined in this post to be very robust and performant. I've had it deployed in a couple web applications for several months now and haven't seen a single Database is locked issue. Best of all, in most cases I didn't have to change any application code - I could simply swap the database declaration.

There is one important gotcha to be aware of before using this in your own code: transactions will no longer behave as you might expect. Because all write queries are executed using the same connection, and because the write queries may arrive in the queue out-of-order (when multiple threads are issuing writes at the same time), it is impossible to predict how a multi-statement transaction would play out.

To mitigate this, I'm in the process of adding a Redis-like Pipeline API to the SqliteQueueDatabase which will ensure that a batch of writes executes sequentially, without any other writes interleaved. The code should be ready soon!

A lot of Python people have been burned by the bizarre transaction semantics enforced by pysqlite and, because of that, assume that SQLite must be to blame. In my experience, however, keeping write transactions short and explicit will mitigate almost all problems! For the times when you're still running into issues, I'd suggest trying an approach like the one described in this post.

Last, but not least, remember: nobody likes the fopen guy:

I've had to fight with the OperationalError just a bunch of weeks ago. I have a multithreaded application in which i have to analyze several hundreds of thousand of entries retrieved from a mysql connection, process it and mark a bunch of flags inside a sqlite's database. Since i wanted to abstract myself from the database part, i opted for PonyORM, which sadly enough looks like is not capable of handling these kind of situations. In the end i discovered too late what was the problem, so i opted for a try/catch statement and a random incremental sleep for every critical section inside my code; the result is frustrating and in the long running does not solves anything. Infact, after 3 days of running, you can see how every thread is stopped waiting inside the critical section, and with enough threads running, the process continues its job for half an hour every 4 hours. So, i guess now i could give a try to peewee, hoping the transiction from PonyORM is easy.

Thanks for bringing up isolation levels, Grant. You are absolutely correct in that settings the isolation_level to None will remove all the bad magic, and you're running in autocommit mode. Behind-the-scenes, Peewee does just this whenever you use SQLite, since Peewee provides its own APIs for transaction management.

It's worth mentioning the "isolation_level" parameter to the "connect" initializer. Setting the isolation level to None will disable the transaction state machine wonkiness. The supposed drawback is a new transaction for every statement. But many people expect that behavior anyway. Transactions can still be used for multiple statements by explicitly beginning with rollback or commit. Coupled with Python's "with" statements and context managers for resource management, I have found explicit transaction management easier to implement and reason about. The Python DiskCache project does exactly this: http://www.grantjenks.com/docs/diskcache/