As the first installment in a series on common patterns in Django development, I'd like to discuss the Pluggable Backend pattern. The pattern addresses the common problem of providing extensible support for multiple implementations of a lower-level function, for example caching, database querying, etc.

The use of this pattern often coincides with places where the application needs to be configurable to use one of many possible solutions, as in the case of database engine support. Consider the following:

The application needs to support Backend A and Backend B but if you look closely at the methods exposed there are some discrepancies:

In Django we see this pattern all over the place:

Here is a first stab at getting our Application to talk to backend A and B:

Notice how tightly-coupled our Application is to backends A & B. If backend C comes along, then we're in our code adding extra elif checks all over the place. What if an end-user wants to write support for a proprietary backend? Then they have to go into your code and add the special-casing -- there has to be a better way!

The solution is to add a layer of abstraction between your application and the backend that unifies the APIs.

Most commonly, you will specify your API in a BaseBackend (in this case the BaseAdapter class is the BaseBackend). You will also specify some way of routing between the interface you expose through the Application and the Adapter that communicates directly with the Backend. In Django this is usually done by specifying a path to your module then dynamically importing the backend at runtime.

As you can see, our application only has to know how to talk to the BaseAdapter, which in this case implements two methods, get() and set(). Which adapter our application uses is configured at instantiation. Here is what the BaseAdapter looks like. It provides a default implementation of get() and set(), but could just as easily raise a NotImplementedError and force every subclass to define its own implementation:

Now it is just a matter of writing our specific adapters for Backend A and Backend B:

In the code snippets above, our Application loaded its adapter at initialization. Django rarely does this, favoring a setting instead. Let's look at an example of how you might allow a module path to be used to specify the default backend:

This pattern allows loose coupling between the API you expose and the underlying code that does the actual work. The loose coupling also makes our interface extensible, as additional implementations can be written without needing to touch the actual application code.

The biggest weakness is feature loss, as this is generally a lowest-common-denominator solution. Suppose backend A has some awesome features that are not supported by backend B - in the interest of maintaining a consistent interface you're stuck either leaving those features out or implementing them yourself in AdapterB.

There are other uses for this pattern besides talking to various cache/db/storage backends. Spammers recently targeted some of my company's sites, hitting things like Comments and Blog Entries. We needed a solution that would work for these content types, as well as for any we decided to add down the road. The various models that needed filtering had a lot in common - like the user that created them (and their email address and IP), the content field that contained the spammy links, etc, but the fields were named something different, or were on a related model. We could have used introspection or done a special-case solution, but instead I opted for a pluggable approach. 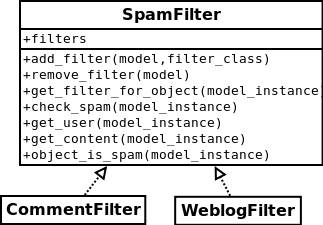 The big difference between this example and the example above is that the routing logic is baked right into the BaseBackend, which in this case is the SpamFilter itself. So the SpamFilter class contains not only the logic for handling spammy content, but also contains a registry of more specialized spam filters. The workflow is something like this:

I hope you found this information useful. It is one of the more common patterns I see both in Django and in the wider sphere of reusable apps. I'm planning a couple more entries in this vein, Django Patterns, so keep an eye out for new posts! As always, any comments, feedback, suggestions, errata, etc are appreciated. Thanks for reading.

Hi. Images are off on this article.

Thanks for the note, Chris! I agree, it would be great if there were a source (besides Django's own code) for common patterns/"good python". You are also totally correct about the ABCs, hadn't seen those before -- thanks for linking. I'm more familiar with the other style of you mentioned, writing stub methods that throw NotImplemented's, and I would agree after looking over those docs -- not sure if that's the route I'd go. Thanks again for the comment!

Great writeup! I like the idea of including (or at least linking to) articles like these in the Django docs -- though that might be a little out of scope for Django proper, it would help those new to Django grasp the proper patterns of writing idiomatic Django code.

One pedantic thing that really doesn't count because I've almost never seen these in the wild, but Python does have interfaces -- http://docs.python.org/library/abc.html -- in the form of "Abstract Base Classes". I'm not sure how much I would condone using them over just writing stub methods that throw "NotImplemented" errors, but it's out there :) (Done being pedantic)