A simple botnet written in Python

As of this week we instituted a regular "hackday" at my office -- anything goes, you can work on whatever you like, so at 11:30 the night before the hackday started I decided on writing a simple IRC-powered botnet. The wikipedia definition for a botnet is a little poorly-worded, so I've paraphrased it:

A botnet is a collection of infected computers or bots that have been taken over by hackers (also known as bot herders) and are used to perform malicious tasks or functions. A botnet performs actions from the client computer while the operator controls it remotely via IRC.

What I wrote really only matches the second half of this definition, as I didn't attempt to write code that "infects" machines or attempt to replicate itself. My project simply allows you to control an arbitrary number of machines via simple IRC commands. The remote-workers communicate with and report back to the control program via an IRC backchannel, while the operator of the Botnet issues commands directly to the control program. 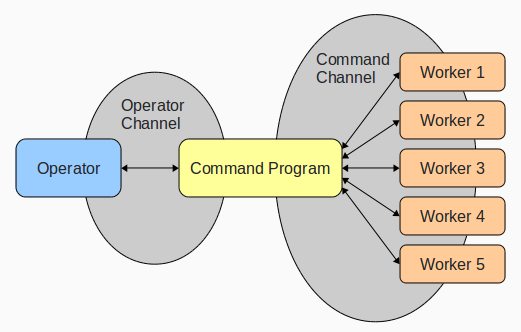 It's not very complicated! I was already familiar with some of the rudiments of the IRC protocol from hacking on a simple IRC bot library. The parts that I needed to figure out were: 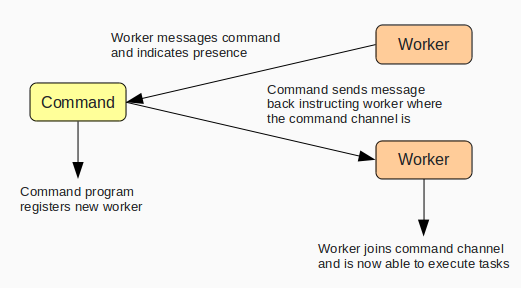 In the event a worker comes online and cannot reach the command program, it will keep trying every 30 seconds until it receives an acknowledgement. Additionally, every two minutes the command program pings the workers, removing any dead ones from the list.

Tasks are initially parsed by the command program and then dispatched to workers via the command channel. The operator can specify any number of workers to set to work on a specific task. The syntax is straightforward:

Below is a diagram of the basic workflow: 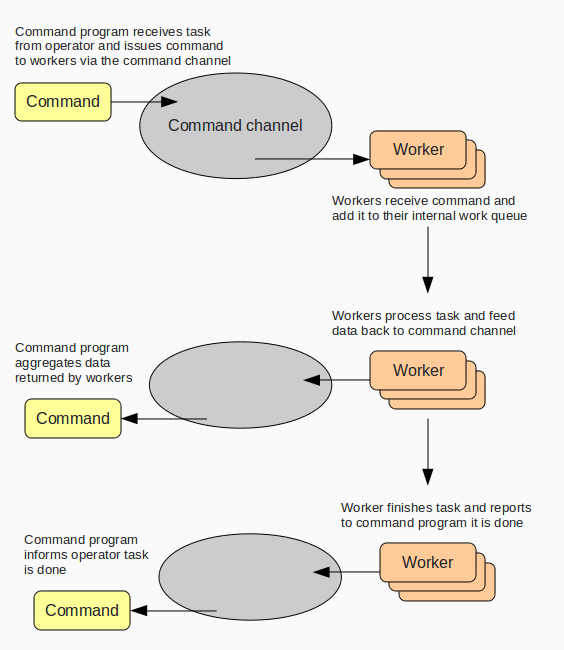 Worker tasks are parsed by the worker bot and can accept any number of arbitrary arguments, which are extracted by an operator-defined regex. Here's an example of how the "run" command looks (which executes a command on the host machine):

Dead simple! Tasks can return any arbitrary text which is then parsed by the worker's task runner and sent back to the command program. At any time, the operator can request the data for a given task.

A note on security

Below is a sample session. First step is to authenticate with the bot:

Execute a command on one of the workers:

Print the data returned by the last executed command:

If you'd like to try this out yourself, feel free to grab a checkout of the source, available on GitHub. The worker is programmed with the following commands:

Adding your own commands is really easy, though -- just add them to the tuple returned by the get_task_patterns method, which looks like this:

Now define your callback, which will perform whatever task you like and optionally return a string. The returned data will be sent to the command program and made available to the operator.

The bots are extensible so you can write your own commands if you want to take up bot-herding -- this tool could be used to restart web nodes, update checkouts, report on status, anything really since it can be used to execute arbitrary commands.

after that just follow the instructions in the project's README

I am having trouble getting started with this code.. I think it looks really interesting but I can't install gevent correctly and it appears as though your software requires that.

A step by step setup guide would be much appreciated.