Building a markov-chain IRC bot with python and Redis

As an IRC bot enthusiast and tinkerer, I would like to describe the most enduring and popular bot I've written, a markov-chain bot. Markov chains can be used to generate realistic text, and so are great fodder for IRC bots. The bot I am writing of has been hanging out in my town's channel for the past year or so and has amassed a pretty awesome corpus from which it generates messages. Here are few of his greatest hits:

whatyousay muses on his recent downtime:

matt: whatyousay goes down like a short DHCP lease.

adam: whatyousay: do you think I was being suggestive?

whatyousay: think i just got trolled by adam.

cleifer: all i want for christmas is a headshot

daniel: cleifer I will grant you that gift

whatyousay: i will bathe in your blood

Ben tries to complement whatyousay, who is in a reflective mood

ben: whatyousay is the coolest office pet ever.

whatyousay: is the reason i started programming, sad as that is.

The idea behind the bot's operation is that, based on things that have been said previously, new sentences can be generated. The "chain" part of "markov chain" illustrates how distinct elements (words, in our case) often follow one another in patterns, forming chains of words. A chain that is 2 words long looks something like this (forgive the crap diagram): 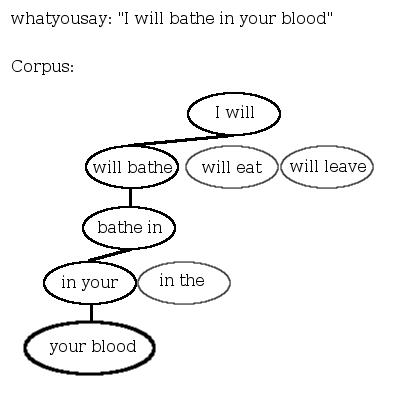 As sentences are added to the corpus, the number of branches at each step grows. The program only needs a single "key" to start with, and it can then follow branches randomly until it reaches a dead end, building up a new sentence along the way.

So how is this data structured in our code? We'll skip the Redis implementation details for now, and instead think of the bot's corpus as a big python dictionary. A new phrase pops up in the IRC channel -- what happens?

cleifer: this is a test

The first step is to split the phrase into rolling groups of words that are the length of our chain + 1, including one group that contains just the last two words plus a "stop word":

Here is the code:

Then, we'll store the first two words (where two is the length of our chain) as the key in the dictionary and add the third word to a list at that key:

In this way, by doing a simple search, we can reconstruct the sentence by starting with the key ('this', 'is'). Suppose another phrase comes in that reads:

cleifer: but this is something else

We could now generate a sentence like "but this is a test" by randomly following from one word to another assuming we started with "but this".

Redis acts, in many ways, like a big python dictionary that can store several types of useful data structures. For our purposes, we will use the set data type. The top-level keyspace will contain our "keys", which will be encoded links in our markov chain. At each key there will be a set of words that have followed the words encoded in the key. To generate "random" messages, we'll use the "SRANDMEMBER" command, which returns a random member from a set.

The code to generate a message based on a "seed" key looks like this:

The final part is to wire this up as an IRC bot and allow it to interact with other users in the channel. For this I used a library I've built, which you can find on github or by installing using pip:

The only pieces missing are the parts that:

These bits are covered in one big method, simply called "log". The idea is that, as we're splitting up and storing the incoming message, we can use those little pieces to generate a bunch of new messages:

All together, here is the code for the redis-backed markov bot.

Thanks for reading, I hope you've enjoyed this post. This project has been a fun one for me and my coworkers. Feel free to submit any suggestions/corrections/etc in the comment section!